The Canadian Regime: An Introduction to Parliamentary Government in Canada, Sixth Edition

In this case we found the item:
The Canadian Regime: An Introduction to Parliamentary Government in Canada, Sixth Edition
on both Amazon.com and Amazon.ca 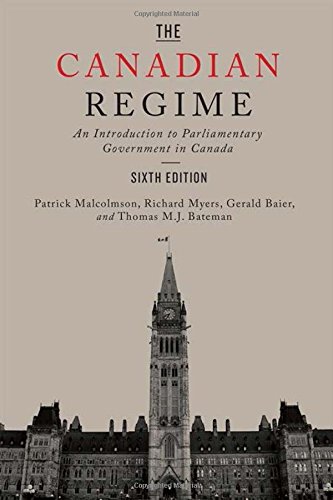 Now in its sixth edition, The Canadian Regime continues to provide the most accessible introduction to the institutions, processes, and principles of the Canadian political system. The book's focus on the inner logic of parliamentary government explains the rationale for Canada's relatively complex political system, which the authors encourage readers to think of as an organic entity, where change in one area inevitably ripples through the rest of the system.The new edition includes the results of Canada’s 2015 federal election and looks ahead to consider changes resulting from the Liberal victory. It has been thoroughly updated and revised and introduces several new topics, such as the impact of the previous Conservative government on the conventions and practices of parliamentary government and the important influence of social media on politics. Two new co-authors, Gerald Baier and Thomas M.J. Bateman, join Patrick Malcolmson and Richard Myers to bring new expertise in the areas of federalism, judicial politics, Charter jurisprudence, political parties, and the ongoing health care debate.